Lots of useful goodies for textures and postwork, and only $2…

Primitive planes can be made into cards, so if anyone happens to like the holiday renders I’m posting in (more or less) card ratio, feel free to grab them for cards in your holiday renders. 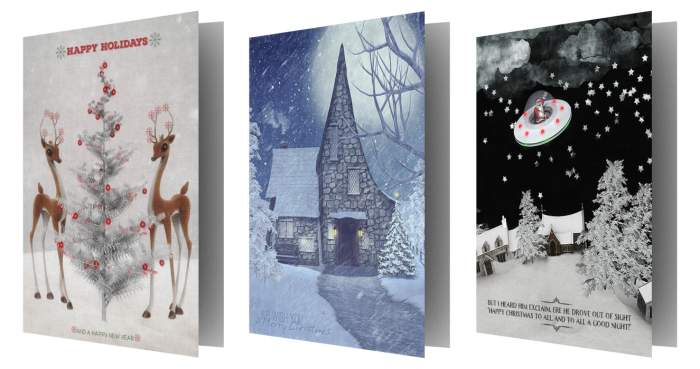 I loaded two primitive planes, grouped (parented) #2 to #1, scaled them down to 15% all and then further reduced the X-axis scale down to 70%. Then I fiddled with translation dials and more rotation to get them to look like a card displayed on a shelf or table. After I finished, I grouped both planes to a null so it’s easier to move them around.

Specifically, the Transpond Covered Bridge from the RuntimeDNA store. It didn’t make it to DAZ, sadly, and it doesn’t appear the DAZ store has anything comparable (or at least a search for “covered bridge” didn’t turn up anything.)

Coming up with terrain — a bridge needs something to bridge — meant cobbling together a bunch of props, and then I was reminded yet again that I need to buy more snowy pine trees. My selection is limited.

Flipmode’s Easy Environments Winter for the pine trees, the snowy road add-on from the RDNA Country Cottage bundle (no longer available), the morphing snow pile and morphing snow terrain that were freebies for RDNA’s Christmas freebie fests (so also gone), and the terrain from Most Digital Creation’s Winter Wonderland.

Unless I’m mistaken, that last one isn’t UV mapped; I couldn’t add a texture to it. I ended up making all the snow the same color and then adding texture in postwork. I used a snow seamless tile I made from a public domain image:

Feel free to download it and use it for your projects.

I have the SAMS3D bridge too; it was a Renderosity Christmas give-away some years back. It’s not available anymore either. The snow add-on is a freebie, as are the birds. I don’t have any other cardinals, though KenG at Hivewire probably has one somewhere in his numerous bird sets.

The texture on the frozen river (a primitive cube) was from one of those two free ice texture sets; I don’t remember which one though. The Ice Patterns set was by Frozenstar and was, I think, part of a Christmas give-away a few years back. It doesn’t appear to be available.

Snow overlays from the PixelBuddha (link a few posts back.)

Yowza! The Art Institute of Chicago has placed over 50,000 hi res public domain images on their website for downloading. Much prettiness!

Fortunately, there are search and filter features available.

Lots of other art in addition to paintings, so it’s a good research reference too.

The site is really sluggish for me right now though.

For DS users, the (well, that didn’t last very long!)

I have both downloaded but not installed yet. Planning some “tinkering time” this weekend, though.